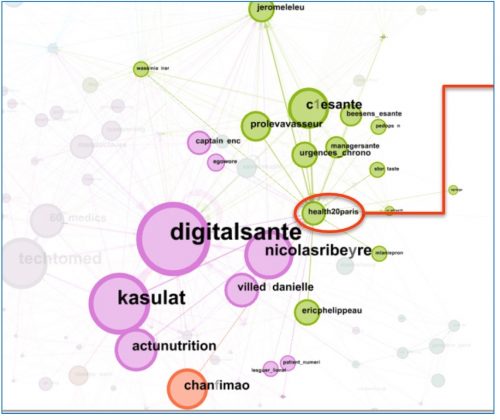 If using Twitter and creating hashtags for health events has been around for more than a decade in the English-speaking world where Twitter began, this practice was less common in the French-speaking world.  Now that it has become common to create and promote a hashtag for a health event, social listening techniques have also become more developed. When there’s an important conference or event, we want to know how many accounts engaged, who exchanged with  whom, who is an influencer.

Since I was giving a talk on therapeutic Virtual Reality at “ehealth trends in 2021,” a webinar organized in French by Interaction healthcare, I was following closely the organization and communication related to the event. Noting that the webinar 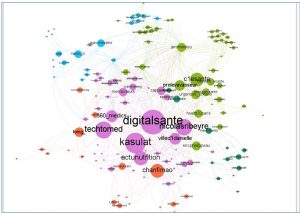 In this blogpost, I describe what happened on Twitter around the event hashtag #esante2021, thanks to a partnership with  FirstLink  a social listening agency who prepared the visuals you see in this article.  Their method is based on the extraction of Twitter data followed by the visualization of the influencers on a map. These maps tell us who communicated on the hashtag and with whom they interacted

These visuals give us a new way to understand the interactions at the conference. In these maps, each dot is an account. The size of the dot varies depending on the number of interactions between that account and the others.

The links between the accounts represent the degree of interaction. The more they interact, the stronger the connection, and the closer they are on the mapping.  142 influencers were identified and 600 interactions were accounted for.

Each color reflects a community that formed during the event. 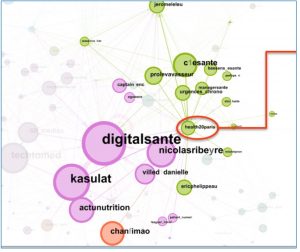 With the tools used by First Link, we identified 5 communities that interacted with one another during the conference, (from left to right and top to bottom, we see the five colors: turquoise, olive, violet,  red, and dark green

In red, we are more likely to see patient associations and public agencies.

The links between the different communities show the dynamic relationship between the start-ups and the various  influencers. First Link also analyzed my account,   @Health20Paris, and the connections that occurred during the event. The figure to the left shows the two groups from a different angle. We see that the Digital Health Club @hcsmeufr and the French eHealth association, @c1esante, are positioned in two different communities. The Interaction Healthcare account @Digitalsante is positioned closer to the start-ups, while @C1esante is closer to the information relays or eHealth experts.

“Concerning the role of @health20paris , the mapping shows it to be a bridge between the olive and violet communities. And in fact, I am a member of both groups. My account facilitated a greater exchange of information between the two communities.“